Well, in the last post I said there were many more things to tell you. But what I didn’t say is that the majority of them are strange, very strange things. Normal, I guess, for here, and beautiful, most of them, but for us, strange. And ever so interesting.

You might have figured out by now that we’re in it for the culture. That is, we’re having a totally cultural experience, no doubt about it. On that note, I have to go on about my zumba classes just one more time. Sorry. But we’re talking about strange. Gotta do it.

So I’ve been going to these classes several times a week. I told you before that they are the most vigorous, exhausting sessions I’ve ever done and that these girls (some of them) can really swing it. But there’s a few things I didn’t tell you.

For instance, the days the little kids come. Which seems to be any day. There we are, jumping around like lunatics to the fastest Mexican music you can imagine, and there’s a couple of two year olds wandering through the crowd. They’re just playin’, chilling and nearly getting trampled, however, no one seems to mind. The next day,  three two year olds and two dogs join the class. The dogs (small ones) also just wander through the crowd, nobody paying any attention whatsoever (except me because I can’t believe my eyes). And then there was the day one woman brought her baby in a car seat. She set it on the floor and resumed her position in class just in front of me. I was focusing on actually managing some of the steps of the intricate dance we were doing and forgot to look at her and the baby for awhile. The next time I looked, mom was sitting in the middle of the floor, the class continued with deafening noise and jumping women, and baby was getting fed. Breast fed. In the middle. Of the floor. During a zumba class in a not-so-clean building with punching bags hanging in the middle of the room.  What next?

Well, it didn’t take long to find out what next. Believe it or not, they asked me to do a yoga class for them! So, the next morning, there I was, giving a speech in Spanish (okay, so I wrote it out and had the teacher read it for me).

And on it went for awhile, thanks to Google Translator. Don’t ask me what it means, I don’t remember, but it was something about how yoga is a tad slower than their zumba. But it seemed to have worked, and off we went. To my satisfaction, they were moaning and groaning very shortly. Ha.

And the next strange but very poignant thing is about our new friend Efrane. 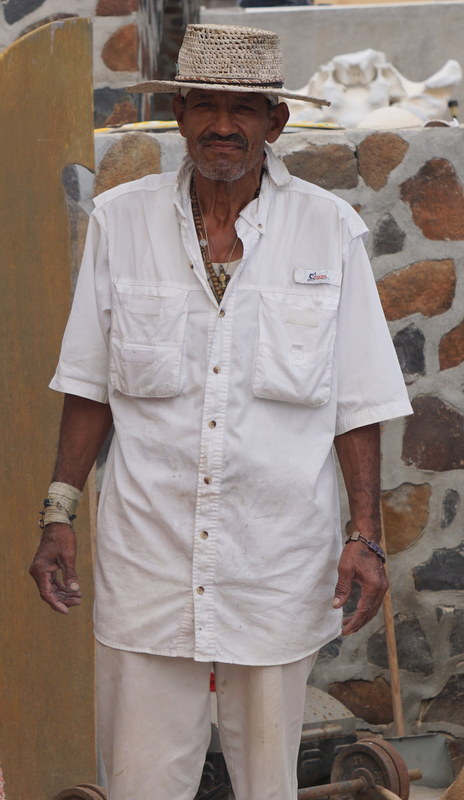 It seems that Efrane has had some mysterious run-ins with the local law enforcement in the recent past and is now back in town and a new man. Anyway, all that matters to us is that he does his job, which is that of expert cleaner and general handyman around the Inn. Well. Dubious as we were when we first met Efrane, he has turned out to be a gem. He cleans with the zeal of an Olympic swimmer (do they teach cleaning skills in the Crowbar Hotel?). He is funny, kind, helpful for absolutely anything and to top it off, a hoot. He calls both Jim and I a generic “Hey” whenever he wants to get our attention. And when I took this picture of him putting on his white cowboy boots, he kept repeating, “Ok, take my picture, but when you look at eet, donn be scired, hahahaha.” 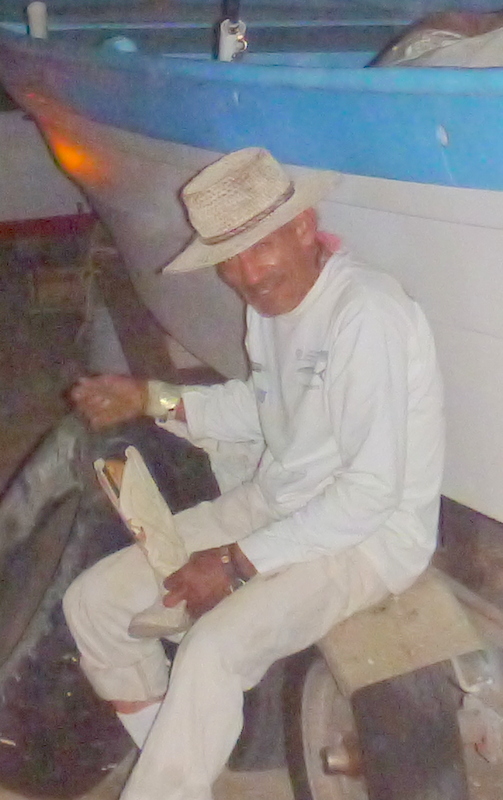 But it turns out Efrane has more talents. The other night, several of us were having an evening dinner out on the deck in the near dark. We were talking about music when Efrane suddenly pulled something out of each pocket. He said in Spanish, “I make music”. And he then proceeded to begin to sing in a lovely quiet voice, very tuneful, and to accompany himself with what appeared to be a gold coloured shaker of some sort in each hand. But he didn’t just shake them. He rotated each hand over and over again, causing a soft tinkle each time. Then he shook his wrist, and melodious rattling noises came out of his bracelet. And then he pulled out the many beaded necklaces around his neck and shook them in time to his song. He finally ended by stopping the singing and just continuing the tinkling for another full minute, all by itself, in the dark. When he finished, there was a complete hush. Strange. And beautiful. Wow.

Other strange things around here:

-The menu of the main restaurant. 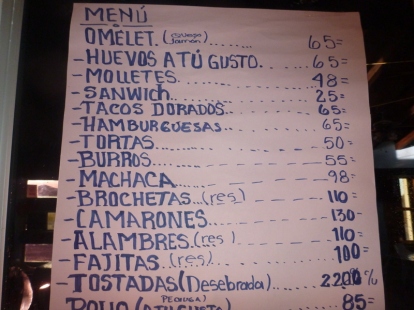 So this menu looks pretty good by itself from it’s place up on the wall.  The strangeness comes in when Chef Robert (restaurant owner, cook and waiter) hands you another one at your table that is completely different.

-The ladies’ room in the same restaurant. Weird as this is, it’s the only one in town you would even consider using. Alone. 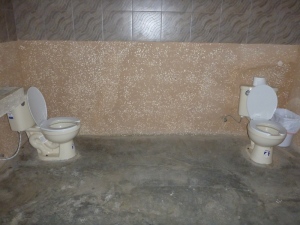 -There’s a siren going off around here often. You always think it’s an ambulance or police, but in fact, it’s the water man. Yep. He drives around in his pickup with full jugs of distilled water in the back and delivers them to your door if you wave at him. Then tonight we thought we heard a real ambulance siren. Turns out it was the police car, all right, but it was driving down main street celebrating the end of the softball game that had been going on all afternoon.

-Tonight we drove back home down the new malecon (road along the water) and noticed that the new streetlights were working. Then we saw the construction truck. The crew was still working on the lights and a man was on the raised platform up at the top of a streetlight pole that wasn’t yet working. He was still doing the wiring on that one, apparently, but the strange thing was, he was working in the complete dark. He was wiring the light but didn’t even have a flashlight to help him. Oh well, it’s a full moon tonight – who says you can’t wire a light by moonlight? Only in Mexico.

And finally, this entry wouldn’t be complete without a word about the guests. This job has let us meet many people and most of them we’d love to see again. They’ve turned out to be funny, friendly, odd, penny-pinching or generous, talkative or non-talkative or just downright great. They have come from Canada, the States and even a couple from Germany. But my favorite has been a woman who just left us. Her job was a tour guide for a German company and she had come to see if this place could be on her itinerary. But, apart from that,  I guess, being so far from home, I need girlfriends and Tina just fit the bill. We yakked, laughed (especially at the two toilets – we weren’t laughing that day, we were SNORTING!), commiserated over losses, compared travels and just had an amazing time together. She was an incredibly good sport, a font of knowledge and a good companion. So sorry to see you go, Tina, hope we meet again!

And that’s it for the Stranger Than Truth Show for today. Walking the edge here is full of amazing things and I’m sure there’ll be lots more. Stay tuned.

View all posts by gjtravellers

2 thoughts on “Just Me and My Friends…”